The call hadn't been put out for long, but Kynlit was expecting the first of those answering to be arriving any day now. She smiled, looking up at Tilnyk, rubbing his foreleg, "And you'll keep us all safe, right Big Guy?" The great, wooden being nodded, and she could feel the warmth of his smile flow through her. The pair stood down at the banks of the Lapis River, watching her earthen colored waters pass slowly. Kynlit felt the anxiousness growing within her, seeing the first of the river ferries for the day coming along from Oasis. For those on the boat, it would have been a full season of travel, only the rich or those backed by the government had access to the portals peppered along the Lapis. For many on that boat, it might be the furthest they've ever traveled away from the great city.

A loud screeching filled the air, reverberating around the entire river delta, but Kynlit didn't startle. They were the last piece of land on the river, just before the Viridescent Shield. Being this close to the swamp land brought with it many new dangers, and an equal amount of opportunities. And it had its advantages too. Being this far down river ensured that they received the most fertile of soil and waters, and had the least amount of oversight and annoyance by the government. Exactly what she and Tilnyk wanted when they took it. A whistle rang out from the ferry, and Kynlit nodded, "Time for you to put on the show." Tilnyk nodded, walking forward on his larger forearms into the shallows of the Lapis as his partner looked on, a teasing smirk on her face, as she turned her head, to see the faces of the newcomers standing at the bow of the ship.

The water surged, seemingly an island as long as the ferry, was on a direct intercept course for the ferry. Tilnyk slapped the water thrice, letting loose a loud bellows. Any that heard it might feel a sudden shift in mood, with some feeling fear takeover, but others feeling a hostility toward Tilnyk. It varied from person to person, and as often as it worked, it didn't. But the "island" surging toward the boat shifted courses and was making its way toward the hulking Tilnyk. It exploded in a deluge and a massive maw of a crocodile opened up. Tilnyk lunged forward with both hands, grabbing the top and bottom jaws. He slammed them together, sliding backwards in the mud as he absorbed the charge from the gigantic crocodile. He tucked on arm around the tip of the jaws, keeping them held against his ribs, and stared the creature in the eyes. The tail slapped all through the water, the claws trying to find purchase in the shallows, an entire being of muscle writing. Tilnyk's free hand, he raised and pointed it at the creature. And then it slowed, stopping, and seemingly becoming docile. Tilnyk dropped his hold on it, and watched as the creature sidled backward in the water, and disappeared once more into the depths.

Tilnyk then lumbered over to the ferry, grabbing a large rope tossed to him by one of the crew, and pulled the ferry over to the shore, stopping so that the now lowering gangplank was just in front of Kynlit. She stood there, crossed arms and a playful smirk, looking up at those on the boat. "Welcome to Muddy Farms." 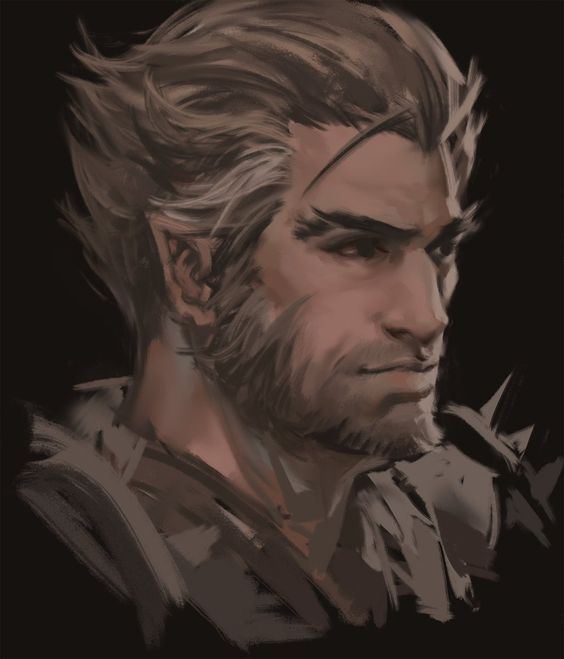 The wind was getting thick with humidity even up in the air, as he fluttered across the skies with Ari. His grip hard on the large cat as they took things slow and steady through the journey. Golden wolven eyes looking across the landscape as he started to sniff in the air a bit, he could sense the life in the flood plains below him it was much more then the desert he found himself in when first entering this world. A much more prosperous hunting ground for the master hunter of the tundra and his companions. "Master, there is some large prey ahead of us. Should I move down to see more closely?" A female's voice rang through the hunter's head as they went through, it was that of Ylfa one of the companions that followed him on this journey. Though before he could even replay there was another voice that came in.

"Uhhh, this place looks gross and muddy... Least it isn't sandy or frozen solid." The voice of Nex seemed to come out, complaining about the small inconveniences like a child, though it did not seem to disturb the hunter. His thighs squeezed onto Ari's sides as he began to guide her down lower for a better view.

"Let us see if we can not find something large to take home." He spoke out loud in the outland's tongue. There was a scene unfolding below as he saw a two massive beasts start to be pitted against one another, one of wood the other of flesh and leather... One was clearly the better target as it seems it was defending the boat nearby. He took a deep breath in and out as he pointed towards the massive crocodilian making sure Ari saw his motion. Wings folded into the large flying tiger as paws were moved forward daggers going out. The Hunter held on for dear life his gauntlets keeping a strong grip in the reins and thick fur of his mount. "Ylfa come from below we will take it from both sides." He thought towards his wolven companion.

The crocodilian went under the water seemingly done with what was going on, though an unnatural instinct guided him and his companion towards where it was hiding under the water. Wald took a deep breath as the tiger made her splash down into the water, spraying out in the air as the pair made their landing. The Wild man drove deep into the water as well, as both sets of claws got into the crocodilian in the water digging in deep into its hide. The thrashing in the water started once again, as the tiger and man dragged their claws and teeth into the hide of the large animal. The crocodilian was soon forced out of the water as a large wolf dove in from below like a bullet into the creature's neck canines digging into the slightly softer hide of the neck. The river began to get stained red as the three beasts began to get to where they needed to be, the human seeming to be almost demon like with his efficiency against the animal. Flesh being dug out of the back of the creatures neck as he went for their spine to put an end to the struggle. Until the crocodilian finally went limp and lifeless. Wald held onto the carcass, the oversized tiger pulling the body to shore near where the boat landed.

He stood up on the shore looking at the beast that he took down with his companions as he blinks with golden brown eyes spitting out some of the cold blood from his mouth. Wiping it slowly as he looks over to the person who was controlling or seeming to control the wooden monster. A tilt of his head was given to the other person as his mouth slowly opened, exposing his beast like jaws, still bloody along with his gauntleted hands. "Hello there, sorry to intrude but looked like you were going to just let this meal go." He spoke in the outlander's tongue in a very high class manner, well spoke despite his appearance. He still had his old clothes on, layered thick for the cold weather of his old home now soaking wet from the small tussle given. He looked to himself and sighed seeming more annoyed by the weight then any temperature change due to it.

"Oh wow! That was soo cool! You and Ari went like vreem then Ylfa went Woosh. And And... Are you even listening to me!" It seems that Nex wanted to get his two cents in, though neither Wald or Ylfa replied to him. They both seemed to keep a slight guard up as they had yet to know just the intentions of the Wooden creature and their controller.

This website uses cookies to improve your experience while you navigate through the website. Out of these, the cookies that are categorized as necessary are stored on your browser as they are essential for the working of basic functionalities of the website. We also use third-party cookies that help us analyze and understand how you use this website. These cookies will be stored in your browser only with your consent. You also have the option to opt-out of these cookies. But opting out of some of these cookies may affect your browsing experience.
Necessary Always Enabled
Necessary cookies are absolutely essential for the website to function properly. These cookies ensure basic functionalities and security features of the website, anonymously.
Functional
Functional cookies help to perform certain functionalities like sharing the content of the website on social media platforms, collect feedbacks, and other third-party features.
Performance
Performance cookies are used to understand and analyze the key performance indexes of the website which helps in delivering a better user experience for the visitors.
Analytics
Analytical cookies are used to understand how visitors interact with the website. These cookies help provide information on metrics the number of visitors, bounce rate, traffic source, etc.
Advertisement
Advertisement cookies are used to provide visitors with relevant ads and marketing campaigns. These cookies track visitors across websites and collect information to provide customized ads.
Others
Other uncategorized cookies are those that are being analyzed and have not been classified into a category as yet.
SAVE & ACCEPT